“The C-Factor”, the new thriller by D.A. Ramirez, is receiving 5-star reviews on Amazon – check it out! 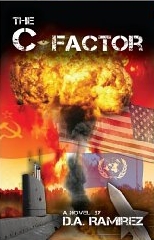 “Dr. George Taylor, cancer researcher and college professor leads a team of World Health Organization Inspectors to the Ukraine during the height of the ‘Cold War’. The team’s mission: evaluate the effects of radiation exposure on workers, their families and surrounding communities at several nuclear facilities. During the inspections Dr. Taylor is unwittingly drawn into a dangerous mystery which began years earlier in Greenland. The truth uncovered could place the entire Soviet system in turmoil. His loyalties will be tested between the UN’s goals and his secret involvement with the National Security Agency.”