Hey y’all! My pal Hunter S. Jones is interviewing Nic Taylor on her site today…check it out! 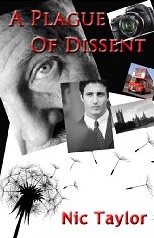 A fast paced thriller, full of political intrigue and corruption. It paints a picture of the UK, where media companies hack into personnel communications at will, in search of their next headline. Of politicians lining their pockets with falsified expense claims and crooked practices operate within the police force. Where government contracts can be bought and sold by those that have the Prime Ministers ear; that too, also on sale for the right price and banks and businesses making millions at the expense of the man in the street.
A story of greed and corruption; where riots and civil unrest are turning the country upside down and a small group of men are attempting to use this anarchy that is spreading across the country to further their own aims.
Into this is dragged a young man Adam, his girl friend Isobel and his brother Dan, a professional rugby player and England’s open side wing forward. These three are pursued by the faceless men who believe they are party to information that could comprise their mission and have two choices, to run or, to turn and fight for their lives.