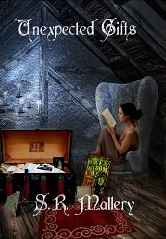 Can we learn from our ancestral past? Do our relatives behaviors help mold our own? In Unexpected Gifts, that is precisely what happens to Sonia, a confused college student, forever choosing the wrong man. Searching for answers, she begins to read her family’s diaries and journals from America’s past: the Vietnam War, Woodstock, and Timothy Leary era; Tupperware parties, McCarthyism, and Black Power; the Great Depression, dance marathons, and Eleanor Roosevelt; the immigrant experience and the Suffragists. Back and forth the book journeys weaving yesteryear with modern life until finally, she gains enough clarity to make the right choices.

5.0 out of 5 stars A History Lesson With a Surprise Ending May 11, 2013
By Lasher Lane
In S.R. Mallery’s novel, the main character Sonia resurrects a family tree from a long-secreted attic trunk.
Struggling with her bothersome, lifelong affliction, she looks for clues in the diaries and tangible souvenirs of her past relatives’ lives, hoping for a better understanding of herself.
With Ms. Mallery alternating each chapter between past and present, I was reminded of T.C. Boyle’s WORLD’S END, but unlike WORLD’S END, UNEXPECTED GIFTS covers many more decades of American history, and the author’s recounting of events such as The Depression, Suffragist Movement, immigrants’ contribution to the Ford Motor Company and Empire State Building construction, Vietnam War and Woodstock is powerful.
Then there’s the surprise ending, as Sonia realizes her friend and her father share something in common.
A wonderful story that should serve to remind us that in this fast-paced world we live in, we should never forget such precious American history.
4.0 out of 5 stars A page turner you will enjoy May 10, 2013
By Frank Lennox
Sonia Weyland not only learns the origins of her OCD, she learns how to cure it (or did she? Not sure about that). And in the bargain, finds a way – by chance — to help her father out of a long depression brought on by an injury from Vietnam. She is able to travel deep into her ancestors’ emotional lives by means of diaries stashed in her mother’s attic. Lucky for her, they recorded the events and emotions that shaped their lives (and their friends. Not sure how they did that!). The vehicle that S.R. Mallery uses to reveal their lives – these diaries – might tax credulity, but it is okay, because we can suspend that disbelief in order to follow her ancestors’ arrival in the United States and trials as immigrants and workers struggling through the depression, and later in the 1950s and 60s. The historical aspects are engaging – tossing rivets on the Empire State Building, Woodstock, anyone? Or the HUAC hearings — and especially her father’s unwelcome trip to Vietnam – but the pleasure of the novel is in Sonia’s story: her emotional trials with a rock star boyfriend (a scoundrel) and a new comer whose ethical care of his wheelchair-bound relative shows a higher path is engaging – if maybe too pat. I enjoyed the novel as a page-turner. The unexpected gifts are more elusive. I look forward to her next novel.
5.0 out of 5 stars Unexpected Gifts was an unexpected book! November 24, 2013
By Marisa Slusarcyk
Unexpected Gifts was an unexpected book!

So many historical events and times are covered from Woodstock and Vietnam to the depression, emigration/immigration and the poor conditions people were forced to endure once arriving here. Even the Titanic is briefly touched on!

I have never read a book that wasn’t a textbook that was able to successfully cover so many time frames in such little space, with the accuracy you really would expect from reading the journals of those who had actually lived in those times.

Where Rosanne Catalano (aka RC Kayla) Speaks with Authors & Writers