Posted by Thomas Rydder on May 16, 2016
Posted in: Articles and Posts by Authors, Author Spotlight, Books I've blogged about. 2 Comments 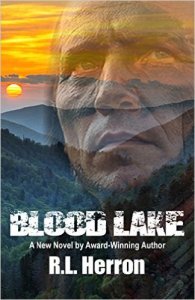 Click on the cover to see it on Amazon!

“No one knows how long the Cherokee people have lived in the Smoky Mountains of eastern Tennessee, although artifacts have been found indicating their ancestors were there more than 11,000 years ago…at the end of the last Ice Age.

After the discovery of gold in Cherokee territory, one of the most disgraceful things in American history began…the forcible removal of all Cherokee from land they had lived on for generations. More than 4,000 men, women and children died on the brutal 1200 mile forced march. It has gone down in history as “The Trail of Tears.”

Award-winning author R.L. Herron has created a spellbinding tale based on the curse of an assassinated Cherokee prophet that has followed one American family for eight generations with relentless, supernatural horror. ”

My latest novel, Blood Lake, was just published. You will find it on Amazon and online at Barnes & Noble. (Whew!) There, the shameless publicity effort is done (don’t I wish). Now … Source: Thi…

I want to travel the world with my dogs, camera and a bag of books.

Book reviews and all things books by Lizzy Baldwin

A Little Blog of Books

Loving Life and Inspiring Others

One author's journey to publication and beyond!

Set Your Mind Free! I write books of Fantasy, Speculative Fiction, YA, and Inspirational Fiction that will give your imagination a boost! Come and Read with me!