Sample of my werewolf novel “The Clearing” 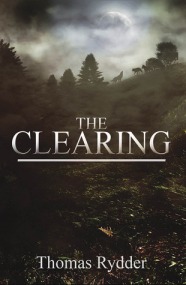 Silent and stock still, with his head bent slightly to the side, he appeared to be listening, so Lizzie looked about, listening too. He remained in that position for several more minutes, and then seemed to shake himself. Turning, he spied his young mistress and bounded happily to meet her. Wrapping her arms around his thick neck, she asked, “What was it, boy? What did you see? Was it a rabbit, huh? Did you see a bunny? Come on, it’s time to go inside now.” Flapjack followed his mistress obediently, but he glanced over his shoulder once more before disappearing inside.

Several days later, while the three enjoyed an after-dinner ice cream, Beth mentioned casually, “You know, I have a new semester starting in a few weeks, and I have to start preparing. Why don’t you and I go out in the yard tonight and collect some lightning bugs? Then you can help me get them ready for class.”

Leaping up, Lizzie breathlessly replied, “Sure! These dishes will only take a minute,” practically throwing the bowls into the dishwasher. Chuckling, Beth walked into the spare bedroom that served as her workshop. Taking down several quart-size jars and her backpack, she began making preparations.

“Honey, get two flashlights out of the drawer and make sure they have good batteries.”

“Okay!” came the muffled reply, and within minutes, all was ready.

As they exited the house, Flapjack slipped by them, determined to be included. “Oh no, boy. We’re working here,” Beth admonished.

Beth stopped in her tracks.

It was the first time Lizzie had not called her Momma Beth. Her attention diverted, she wordlessly allowed the standoff to pass, and they immersed themselves in the business of catching the luminescent insects by the light of the full summer moon. While Beth coaxed the flashing insects into her jars, Flapjack bounded playfully at the lights dancing about his back yard. He tried again and again to ensnare one in his snapping jaws, while Lizzie ran in front of him, pointing out the biggest and best insects for him to chase.

Flapjack made a sudden turn to dive after one evasive foe, and bowled Lizzie heels over head. Beth started forward, but Lizzie sat up quickly, laughing hysterically and sputtering when Flapjack engulfed her with slobbery kisses. They all ended up on the grass, mother and daughter giggling, while their oversized playmate ran about, barking to get them up and running again.

Suddenly, he stopped short, his head twisting toward the woods. Trotting over to the fence line, he sat on his haunches and stared.

“What in the wor—” began Beth.

An eerie howl split the night air. It seemed to go on forever, rising in pitch and holding, before slowly falling off. Beth felt the hairs on the back of her neck stand up, and Lizzie stood frozen, staring up into the hills. Beth had completed her graduate work in the Gila National Forest of New Mexico, and had heard her share of coyotes yelping.

This wasn’t a coyote.

The howl was stronger—almost demanding—and lacked the mournful tone of a coyote’s lament. Flapjack whined then sprang up to pace back and forth, hunching his shoulders and sniffing ceaselessly. Another howl burst forth, this one closer.

Keeping her eyes on the dog, Beth commanded, “Honey, go inside. Everything is fine, but I think you should go in for a minute.” A third howl cut off any protest the youngster might have made, and the slamming screen door was evidence of her compliance. Turning her attention back to the woods line, Beth considered the agitated canine. “Come on, boy. Let’s go inside. We got enough bugs tonight, anyway.”

Suddenly, a faint rustling came from just inside the trees, and as her eyes snapped toward the sound, she could swear she saw a shadow flitting by an opening. Flapjack’s whimpering elevated and he was now standing with ears up. Suddenly, he bounded forward and cleared the fence in one leap. Beth scarcely had time to scream “Flapjack!” before he disappeared into the blackness of the forest.

When he had heard the first howls, he did not understand. He had heard them not with his gigantic ears, but rather from within his heart. Several days before the fateful firefly hunt, Flapjack had been lying in the hallway adjacent to the kitchen when the sound exploded inside him, pulling him to his feet. Trotting over to the back door, he peered out over the moonlit back yard. There. Just inside the tree line was an enormous shadow, standing motionless on four legs, eyes glimmering silver in the pale moonlight. After several seconds, the shadow melted back into the trees and vanished.

Flapjack had felt uneasy since that day, and his restlessness grew as the moon progressed through its phases. On the day L’zzy found him in the back yard, he once again heard the howls. They were all around him, but only inside him. He whined and rolled in the grass, but could not rid himself of their insistence. Images cavorted in his head, bloody running barking screaming, and then only gurgling. The creatures within his brain were calling to him, exhorting him to join them. As he lay panting and spent in the grass, for the first time he heard The Elder.

This voice was louder than the rest, and it neither yelled nor screamed. It brimmed with confidence, awash with power. In some dim, forgotten language, it promised Flapjack that soon it would be time to leave the comforts of his life and lead the brotherhood. Free, wild—and immortal. When L’zzy came up to Flapjack in the yard, The Elder’s voice faded, and the confused canine looked after it longingly.

The evening of the firefly gathering, a full moon lurked behind scuttling clouds. All day, the anxious dog had heard snarls and hisses in his head. When he realized L’zzy and B’th were going outside, he almost mowed them down in his desire to be near The Elder. As he cavorted round the yard, it was harder and harder to concentrate on the flickering lights as the voices grew louder and closer until the first audible howl split the night, and he knew they were near. Part of him tried to stay and resist, but in the end there was little chance of fighting. When the howl from The Elder came, its message was clear, “Follow us, brother…your place is with us, free and leading our brethren. Come…come…come!”

As he landed on the woods side of the fence, he knew They were just inside the woods, and They wanted him to follow. Striking out toward the top of the rise, he could sense where to go, and what would be there waiting. On either side of him, dark shapes flitted among the trees. Silver eyes glowed around him on all sides, but he was not afraid, only excited—his Master awaited him.

As Flapjack trotted into a clearing at the hill’s peak, monstrous wolves emerged on all sides. Their coats were shades of gray and charcoal, their eyes were sterling, and all were larger than he. As they formed a loose circle around the lone dog, a hush fell over the forest. The wolves quieted at once. And from out of the woods strode a beast unlike anything Flapjack had ever seen.

Perhaps Flapjack should have stayed in the house…

“The Clearing” is coming soon!

12 comments on “Sample of my werewolf novel “The Clearing””

Set Your Mind Free! I write books of Fantasy, Speculative Fiction, YA, and Inspirational Fiction that will give your imagination a boost! Come and Read with me!

Transforming Education, and Leadership, Transcending Where we Earch Are in Lifee