Idiots who drowned in the gene pool #27

(09 Nov 1999, Mexico) A Mexican jail guard died from an excess of zeal while supervising an inmate’s conjugal visit. Raul Zarate Diaz was closely watching his charge from the roof of the prison when he tripped over an air vent, crashed through the skylight, and fell 23 feet to land beside the bed where the inmate and his wife were, against all odds, enjoying an intimate moment. The interrupted prisoner, offended by the intrusion, attempted to start a riot, but was squelched by prison security.

Prisoners in the Tapachula facility reported that Diaz was in the habit of prowling the prison roof during conjugal visits, in search of prisoners to supervise. Local law enforcement reported that the guard was clutching a pornographic magazine, which was retained as evidence, and binoculars, whose sentimental value led to them being given back to the family of the deceased.

Idiots who drowned in the gene pool #24 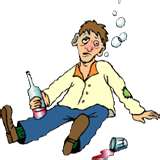 (August 1999, Australia) Drinking oneself to death need not be a long lingering process. Allan, a 33-year-old computer technician, showed his competitive spirit by dying of competitive spirits. A Sydney, Australia hotel bar held a drinking competition, known as Feral Friday, with a 100-minute time limit and a sliding point scale ranging from 1 point for beer to 8 points for hard liquor.

Allan stood and cheered his winning total of 236, (winners never quit!) which had also netted him the literally staggering blood alcohol level of .353 grams of alcohol per 100 ml of blood, 7 times greater than Australia’s legal driving limit of 0.05%.

After several trips to the usual temple of overindulgence, the bathroom, Allan was helped back to his workplace to sleep it off, a condition that became permanent.

A forensic pharmacologist estimated that after downing 34 beers, 4 bourbons, and 17 shots of tequila within 1 hour and 40 minutes, his blood alcohol level would have been 0.41 to 0.43%, but Allan had vomited several times after the drinking stopped. The cost paid by Allan was much higher than that of the hotel, which was fined the equivalent of $13,100 US dollars for not intervening.

It is not known whether Allan required any further embalming.

Where Rosanne Catalano (aka RC Kayla) Speaks with Authors & Writers